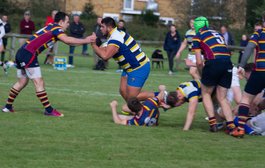 How was this game lost?

PJF throw away victory by not listening to the referee

PJF set of at a fine pace and within 15 minutes were 14 points up after a brace of tries from Luke Couchman that were converted by Dan Wilkinson, and then the penalties started to come. Off the restart PJF conceded a penalty in front of the posts allowing O Freemens to claw 3 points back. This was followed about 10minutes later by yet another penalty. PJF kept conceding penalties because of a new directive to referees stating that if a side appeals to the referee the referee is to warn the side once and thereafter proceed to penalise each appeal which the referee seemed happy to do with gay abandon. PJF did not learn the lesson and constantly gave Freemens free ground. Eventually the Freemens scrum half scrambled over for a try close to the posts and the Freemens kicker added the extra points. PJF who, when they did play showed more enterprise and flair but turned around with a meagre 14-13 lead at half time.

From the restart we had the move of the match when debutant Vithu fielded the ball and charged towards the Freemens defence which crumbled, after three magnificent off loads the move was finished off with Chase Thompson going over in the corner, Dan Wilkinson adding the extra points. PJF had started the half showing the style and level of rugby they could play. But after the flourish the game returned to a pattern of PJF gifting Freemens possession through conceding penalty after penalty. Freemens accepted the gifts and kicked another two penalties to take the score to 21-19. PJF then managed to get a penalty within kicking range themselves and moved out to 24-19. Still PJF did not learn the lesson and chat, even amongst themselves, bought further penalties and two yellow cards. Eventually all the pressure they heaped on themselves and with one man light it was inevitable that Freemens would get a chance to cross the whitewash and indeed they did with about 8 minutes remaining they went over in the corner to square the game and the Freemens kicker added the extra points to give them a 24-26 lead. Freemens had stuck at it and kept their mouths shut and the score board reflected that story. The match had one further disappointment for PJF, with 1 minute to go and just to the left of the posts PJF got a kickable penalty, but with Dan Wilkinson off the pitch having received a bang on the head PJF did not have a regular kicker on the pitch and the kick was scuffed wide.

The final whistle went and PJF had lost a very winnable game. A penalty count of 30-8 in Freemens favour and two yellow cards were the reasons that PJF lost the game. We must learn from this and keep our mouths shut. We can lament the refereeing decisions and the missed scoring passes but looking in the mirror we have to accept that we lost the game, Freemens did not win it.

On a positive note there was a great performance from Vithu Niranjan who made his debut during this game. Vithu played in the back row and showed himself to be an intelligent and fierce competitor. Luke Couchman had a great game in the centre and spoke very well at the end of the game acknowledging that the only people we could blame for losing the game was ourselves. So its back to the training field this Wednesday where we need a good turn out from players so that we can grow as a side. There were glimpses of something really special but to realise the potential of the side will need work. Our next game is away at Trinity on October 19th so we have three Wednesdays to work out the issues to ensure that the real PJF turn up on October 19th.