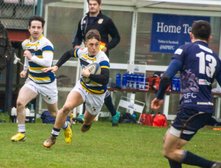 PJF complete the job in style

Both the Met Police and PJF turn on the style to produce an entertaining finale to the season.

Both the Met Police and PJF turn on the style to produce an entertaining finale to the season.
PJF travelled to Imber Court only needing one point to win the league, but determined to get all five to ensure they won it like champions. The game kicked off and saw Met Police straight on the offensive. Five minutes of pressure was to no avail as the PJF defence held firm. It was PJF who got onto the score board first when they suddenly broke out of their half with some slick inter-passing and Brad Bosman went over for the first score. The kick missed. Shortly afterwards Joe Dwyer made a telling break and Jack Kennedy finished off by going under the posts. But again the kick was missed. Met Police struck back almost immediately when their forwards drove deep into the PJF 22m and drove over midway between the posts and the touchline. The two extras were added and it was a 7-10 game. The pattern of the game was established and shortly after the ball was swung across field and Joe Dwyer broke through the centre of the stretched Met Police defence. Iain Greenwood added the extra points. Next up Chase Thompson received the ball on the wing and tore through the Met Police defence to go in close to the posts. Iain added the points and PJF had four tries on the board and the league in the bag. Now to win the game. But Met Police were not going to give PJF an easy afternoon getting a try back themselves and kicking the conversion. Almost straight from the restart the Met Police re-applied the pressure and forced themselves over. Their kicker added the extra points to make it a 21-24 game. But the action in the half wasn't over yet, when Callum Law took the ball into contact and half broke the tackle allowing him to offload to Lewis Dennelly who went in under the posts. The extras were added and PJF had re-established an 11 point cushion. Next to score was Alex Wilson who capped a fabulous season with a great try out on the left hand side. Chase Thompson stepped up and coolly slotted the extra points to make it 21 -38 at half time. The game was heading for a cricket score.
Met Police had set their sights on a bonus point for safety, but it was PJF who added to their total first, from a set scrum that had been dominant all afternoon. From a big drive Brad Bosman picked up at number 8 and kept the scoreboard ticking over by crossing the whitewash. Iain Greenwood added the 2 extra points. Straight from the kick off Met Police turned the ball over on the PJF 22m and created space to go through close to the PJF posts. The Met had their bonus point. From the kick off the ball fell to Joe Dwyer who ran through the Met Police defence like a knife through butter. The extras were missed, this time the ball bouncing off the post. The score? 30-50. This certainly was a mad frenetic game. The referee seemed bemused and struggling with the pace of the game. Another break from Chase Thompson and Alex Wilson finished off the move with his second try. The conversion was kicked. Met police were next to add to their total going over wide out. They missed the kick. PJF had the final word, however, when Sam Arnold went over after a great break. The kick was missed. The final score 35-62. PJF were champions in style and the club's supporters had enjoyed a 15 try game. It was nuts, but PJF were promoted as champions. Their winners plaque was awarded to Iain Greenwood by Tyrone Lawless form Surrey. So now the planning starts for next season as the club looks for a new coach with Mike Davies looking to move back to South Wales. The club owes Mike a massive thank you for his time and his willingness to step into the breach for the last three games. The club will also like to extend a thank you to Ozzie and Tom Street who provided the transport for the side to Imber Court in the school's minibuses. We wish Met Police all the best for next season and look forward to the new challenges of Surrey 1.
Share via
FacebookTwitter
https://www.pjfrfc.co.uk/teams
Recent news