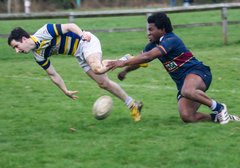 A big day at the Pightle

PJF ease past O Blues after very tight first half

A sunny day at the Pightle with stomachs full after lunch, a big thank you to Bryan, Luke, Dougy and Graham for helping to make the Past Players lunch a memorable event. A special thank you to Julian Norton for his Chefy bit and the young ladies who helped out with service and to Siobhan for keeping the beer flowing. Then it was down to the main event. PJF were playing host to O Blues who comprehensively beat PJF earlier in the season. As expected it was nip and tuck with Blues getting their noses in front through a penalty. PJF struck back with a penalty of their own. But first real blood was drawn by Blues who went over with a well taken try in the corner to make the score 3-8. PJF cam back and managed to get another penalty in front of Blues posts, 6-8. There were no further scores until about 5 minutes before half time when Jack Kennedy spotted a gap and nipped through it to go in under the posts, Seaghan Davey adding the extra points and PJF went into half time with the narrowest of leads 13-8.

The second half started and PJF started to exert some sustained pressure and it wasn't long before Blues defence was punctured again. Seaghan Davey adding the extra points and PJF had a bit of daylight between themselves and Blues at 20-8. Again PJF came forward and from a 5 m scrum PJF held their width and from Brad Bosman picking up and laying off to Jack Kennedy who drifted in through the gap created by PJF maintaining their width 25-8. Blues were beginning to pick up knocks from the uncompromising hits put in by both sides, big yards being made by the PJF front row with Luca Bellavia making some hard yards with Blues players hanging off him. From a kick ahead the Blues dangerous wing felt his ham string pull and he had to go off. It wasn't long before PJF attacked down that wing with Jon Osbourne interchanging passes with the ever present Brad Bosman before going over in the corner, 30-8. The conversion just missing. PJF now had the bonus point in the bag. The coup de gras was administered by Iain Greenwood who ran in under the posts for the fifth try. Seaghan adding the extra points taking the score to 37-8. Blues to their credit regrouped and created a period of pressure themselves but PJF were able to keep them out until Blues managed to break the PJF line, a missed tackle saw Blues in under the posts and they kicked the conversion to make the final score 37-15.

A great result in a game that was hard fought and a credit to both sides. The difference on the day was the pressure that PJF exerted in the contact area that saw Blues conceding too many penalties to relieve the pressure in the second half. We wish Blues the very best for the rest of the season. Next week PJF at at Frant Road taking on local rivals Streatham and Croydon. Although Streatham have had a poor season to date there have been signs of recent improvement and they cannot be taken for granted by any means . With the end of season fast approaching PJF will need to make sure that they keep their concentration to the end with Kingston only 5 points behind and a better points difference.