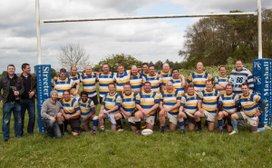 Vets sideline OW's in second round

Merry Christams and Happy New Year to you all

Not to be out done by their juniors, PJF's Vets XV gave a clinical performance in the second round of the Evergreen Cup. They trounced local rivals Old Walcountians 34-7 scoring 6 tries and letting their opponents score a consolatory try in the dying minutes. PJF were far too powewrful upfront and hard yards were made by the forwards and capitalised by the backs as they took the game to opponents who were up for but not up to the job in hand.

Good solid drives and quick re-cycling soon saw the ball whisked across the backline for Paul Cripps to open the account. O'Shea added 5 points from a line out take and drive. No 8 Sweetman did likewise from one of the many scrums taken against the head. Flanker Tim Wood capped off a sterling display as he took the ball from a maul 40 yards out and ran through the defence to cross the whitewash under the posts.

PJF kept up the pressure in the second half and were unlucky to score more points as the official seemed to be rather quick with his whistle. Despite this, Cashinella rounded off a fine move when he joined the line from full back and scored. Brannigan completed the rout when he latched on to a mammoth forward drive.